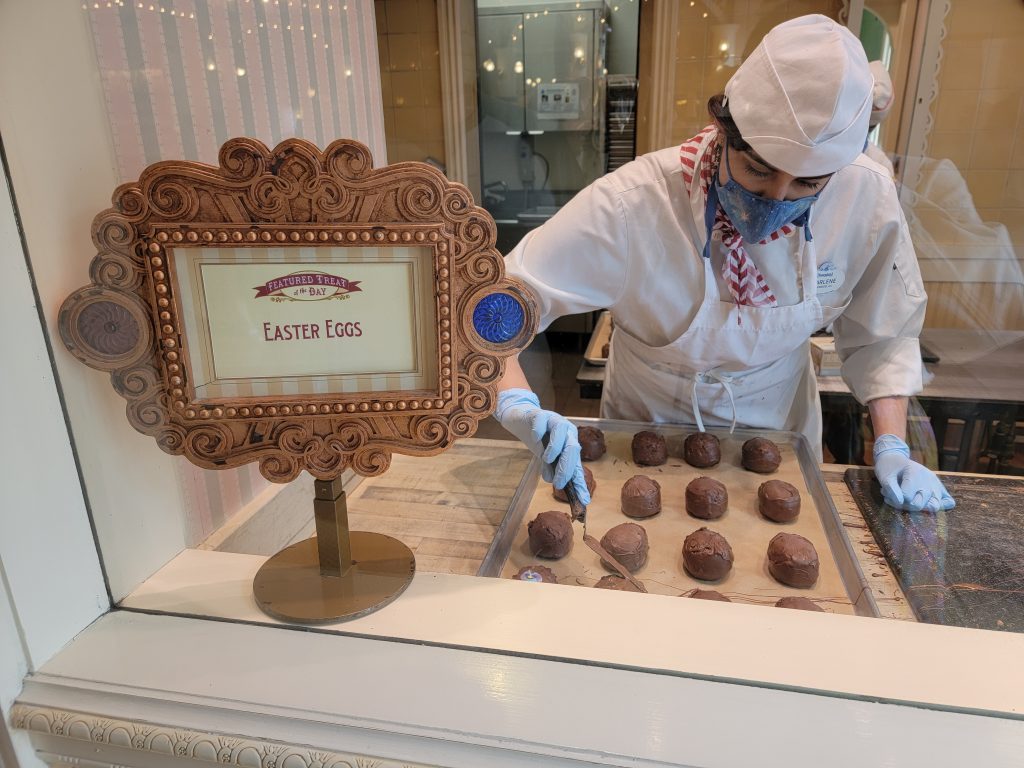 Popular Disneyland Snacks: Inside the World of Collectible Candy

Popular Disneyland Snacks: Inside the World of Collectible Candy

Hey Discrew, you hungry? Because today, we’re talking Disneyland snacks. Specifically the limited-time-only sweets that leave passholders swooning. When discussing the most coveted Disneyland snacks, we’re not talking about the most bizarre. The pickle corn dog from Downtown Disney? Oddly delicious, but not the vibe for today. The PB&J mac from the DCA Food & Wine Festival? Absolutely not the vibe ever.

Instead, we’re diving into a Disneyland snack phenomenon that resurges every year, something we affectionately call collectible candy. Food is an experience at Disney parks. People often plan their entire Disney vacations around their dining reservations, relishing the opportunity to try the newest restaurant to hit the parks or the best dishes at the Food and Wine Festival. But there are some Disney dining experiences that guests look forward to more than an under-60-minute wait for Rise of the Resistance — and they often involve highly coveted candy.

Here’s what to know about the Disneyland snacks that are honestly souvenirs in their own right.

With spring in full swing, casual Disneyland guests think of pink flowering trees and an Easter egg hunt. But many seasoned Disneyland fans are all about the fudge eggs. Sold only at Candy Palace on Main Street, U.S.A., the chocolate-covered fudge eggs are $12.99 and incredibly limited (Disney will only sell two to each customer). They’re only available on Mondays and Saturdays through around mid-April this year.

These eggs are so popular that there’s often a line to pick them up that can stretch down Main Street, but Disney has also implemented a virtual queue system, similar to the coveted candy canes. You can arrive at the sweet shop, get a return time, and come back when it’s your turn to pick up an egg.

The phenomenon of “collectible Disneyland snacks”, if you will, is tied to the longtime popularity of the Disneyland candy canes. For the past several decades, Disneyland Resort has sold giant, handmade candy canes for $15.99 on select days during the holiday season. The dates are announced in advance, and guests line up — often before park opening — for their chance to join a waitlist to secure their candy cane. For many fans, these candy canes are a holiday tradition. Others are in it for a delicious (albeit difficult to eat and cavity-inducing) snack. And some just want to do it for the ‘gram.

It’s no wonder these candy canes have just as much, if not more, of a cult following as the fudge eggs. Affectionately known as the “Disneyland candy gods,” the same Disneyland Cast Members — Chris Thompson and Rob McHargue — created the famous candy canes and the chocolate-covered fudge Easter eggs.

The recipes for the candy canes and the fudge eggs are actually patented! That’s not uncommon for Disney park foods, but it’s definitely another element adding to the fascinating collectible candy lore. Is Disney putting the Krabby Patty Secret Formula in these snacks? Guests may never know, but they’re certainly going to keep buying them. Still, we wonder — what’s with the candy craze?

So, why are these snacks such mainstays in Disneyland culture? You wouldn’t ever see collectible edibles like this at Magic Kingdom — Walt Disney World is considered much more a tourist destination than a local’s park. We couldn’t imagine limited-release candy canes or fudge eggs being sold for a few days only at Magic Kingdom; the lines would be wild. If a limited-time treat is sold out for the day, a family on vacation in Florida can’t simply come back the following week for another chance to buy it. It’s just not sustainable for the average Disney World visitor.

At Disneyland, however, where most of the guests visiting each day are locals and passholders — who know they will visit again that year, that month, or even that week — promotional snacks are much more doable. If an item sells out, a Disneyland local with a Magic Key pass can probably just come back the following week. It’s been proven that the park can sell limited-release candy canes for nearly $16 a pop, and Disneyland stans will buy still them every single time!

Yes, these snacks are totally Instagram-worthy. Sure, they’re larger than average, beautifully designed, and the perfect subject for a seasonal photo at Disneyland. Since most people who purchase the handmade candy canes and handcrafted fudge eggs will consume them pretty soon after taking a video of the snack for TikTok, are they really worth it?

But something that makes these so sought after is their exclusivity. These treats are only sold at Disneyland, in limited quantities, and for a limited time. You can get a classic Disneyland corn dog or churro every day of the year. Even the beloved churro toffee is readily available at the Candy Palace every day.

A candy cane or chocolate-covered fudge egg, on the other hand, is just as ‘rare’ as it is delicious. This keeps fans coming back year after year to snag that sought-after sweet. They’re just as coveted as the merchandise we often see resold on eBay (we’re pretty surprised that these seasonal snacks aren’t being resold like the Figment popcorn bucket was). And Disney fans love exclusive merchandise — especially when it’s only sold for a limited time. In this case, that merchandise just happens to be edible.

Limited-time treats you have to line up to snag might not be everyone’s go-to purchase at the happiest place on Earth. But honestly? If a giant candy cane or fudge egg is your Disneyland dream, go off, bestie. We’re cheering you on!

Keeping up with the Disneyland snack craze? Us, too.  Follow Perfecting the Magic on TikTok for more Disney foodie fun.